Sydney Swans return to form after disastrous start to the season

The Sydney Swans are coming back from their worst ever start to a premiership season and are now looking like they could be serious contenders for the title. In what was a shock start to the year, the Swans lost their first six games in a row. Crazy, really, when you consider that this was the team that was in the grand final just a few months prior.

However, they have somehow managed to turn it all around and have now won eight out of their last nine matches. In the most miraculous turnaround of the season, the Swans now see themselves sitting in the top eight and are well and truly back on track for finals football. Sydney’s Coach John Longmire isn’t getting too ahead of himself, though, and squashed any comment about making the final. “Do you think I’m a dreamer?” he said with a laugh after after their win against the Gold Coast Suns. “No, I’m all about going back to work and working out what we did well and what we need to get better at.”

This amazing run of form sees the club move into striking distance of the top four and definitely places them in a very good position come the end of the season. This is something that the red and white faithful are sure to be pleased about after their dismal start to the year. They do have the scary task of taking on the joint league leaders when they come up against the GWS Giants away from home next week. GWS are the favourites at 1.80 while the Swans are 2.07. As these bets predict a Giants win, it won’t be an easy game for the Swans in the Sydney derby. However, GWS has slipped up in recent weeks and John Longmire’s men will be hoping their recent form can get them over the line.

Part of the reason the Swans struggled early on in the season was due to the absence of key defender Dane Rampe. Since returning from injury having broken his arm in a freak training accident earlier this year, the All-Australian has played a pivotal role in getting the Swans back on track in their 2017 campaign. In what was one of the unluckiest injuries, the young defender tripped while trying to jump over a chain just 25 metres from the Swans head office.

“I couldn’t believe it, to be honest,” said coach John Longmire. “He tried to jump the chain and mistimed his jump and fell on the concrete 25 metres from the front door.” 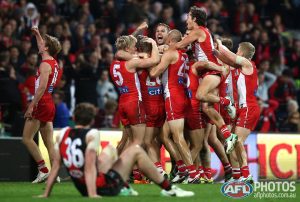 Another key player for the Swans has been Gary Rohan. After his sickening head clash in Sydney’s loss to the Carlton Blues earlier in the year, the powerful forward suffered a heavy concussion. However, he has come back and is now pushing the team forward with some extremely powerful football. His speedy pace and knack for taking the most difficult marks have seen him become one of the deadliest forwards in the game and a major asset to this Sydney team.

The latest win against the Suns will most likely have every Swans supporter dreaming of what might be come September after such a dominant win, which saw the side destroy their opposition by 67 points. If they do make the finals, they will be the first club to do so after a 0-6 start to the season.