The first round of the 2015 is now behind us and footy is now underway for the season. There are already six clubs that have passed their 2014 membership tally, while the majority currently have over 90% of the of last seasons numbers.

Both South Australian clubs are leading the charge with Adelaide signing up 3000 more members, just ahead of Port Adelaide who are around 2,700 up on last year.

Fremantle, Richmond, St Kilda and Sydney have also all passed their previous seasons totals with all but the Saints setting new membership records.

The full list of membership numbers are below as of 7th April 2015.

With just weeks to go until the kick off the 2015 AFL pre-season, see how your team is faring in the membership stakes.

As the revenue from memberships is some of the cleanest money for the clubs, it is important to build your following from year to year. 2014 saw the total memberships hitting over 800,000 for the first time, with 12 clubs breaking their all-time records.

As to be expected, on-field success can greatly impact membership numbers and this is reflected by the reigning premiers Hawthorn who have already smashed through the 60,000 mark. With just under two months until round one, the Hawks are well on their way to eclipsing last years record of 68,650.

Port Adelaide continue to go from strength to strength after increasing their membership by almost 14,500 in 2014. The Power have already hit over 52,000 for this season, only three thousand shy of last years total.

Cross town rivals, Adelaide are also posting decent numbers, having already smashed through the 50,000 mark. The Crows are chasing last years record of 57,231.

Despite finishing with the wooden spoon, St Kilda are almost 6,000 up on this time last year, while Richmond are also around 4,000 members better off. 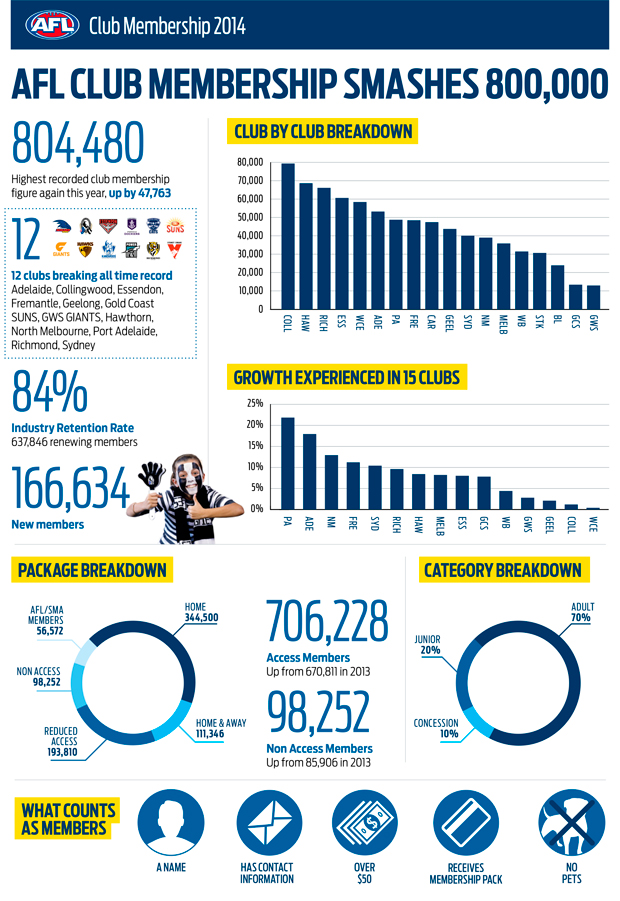